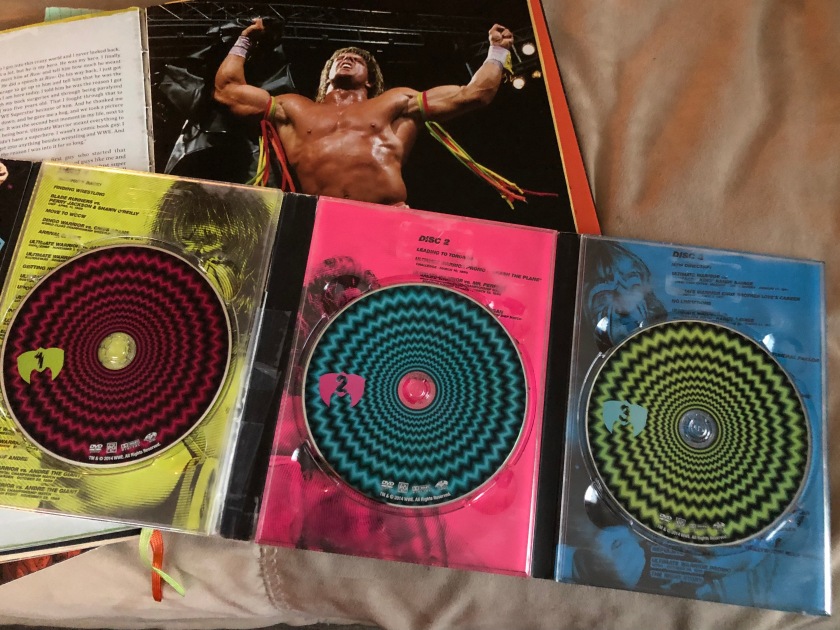 Well, warriors- I finally did it! I posted a pic of the DVD and book together as today it’s about my memories of receiving both. Of course “The Ultimate Collection” DVD was released in 2014 and the book “A Life Lived Forever” in 2015. In typical ME fashion, I have a few stories to share upon finding each gift at my house. 📗📀

Let’s start with the DVD since that was first. When Warrior had passed, I had seen clips of WWE’s “Warrior Week” and a pop up on the screen was of “The Ultimate Collection.” I had heard he was working on this and synchronistically (remember that?) it was coming out in April. My mind didn’t even want to focus on that since I was listening to these commentators sitting around a table discussing Warrior. I didn’t order then but within a day or so knew buying it was a must. Unlike collectors who may possibly get anything they can lay their hands on, I looked up reviews and found out pretty much what was included. The “Always Believe” DVD was similar but listening to his family at that time would have been way too emotional. I also didn’t want to hear others opinions and really, I just wanted Warrior’s words his way.

The DVD arrived on the last day of my kids Spring Break, that figures. At least it wasn’t a Saturday when my husband would check the mail. No way was I ready to explain this to him at all. After a few agonizing days of waiting, finally I had the house to myself. It actually was raining so even MORE time if I wanted since the dog wouldn’t get her walk. I get upset too if she doesn’t get her walk in but not that day!! I spent about 3 days on and off watching and for the first time in a while, I laughed! Big belly laughs came out of me as I texted my brother much about matches, interviews, and much more. He was very gracious to answer despite not on a lunch break, lol.,, So many flashbacks and so many new things too.

For those that don’t own one or both, you may want to skip these next few parts. I am doing a little bit of a spoiler alert here so read at your own risk!

I had forgotten about Lord Alfred Hayes, didn’t know Percival “Percy” Pringle III from the Dingo Warrior days was Paul Bearer later on, and had no idea “The Disciple” in WCW was none other than Brutus “The Barber” Beefcake! So much fun it was to reminisce…

Now, let’s move onto the book “A Life Lived Forever.” Once I heard about it’s release, I didn’t need to look up anything this time. Triple H had done a short video but I already knew it was coming my way. After arriving home from the grocery store one morning in April ( yes again) of 2015, there was a package on my front stoop. I knew it was the book. I didn’t even unpack hardly anything before opening it up. Good thing it wasn’t hot outside or my freezer stuff would’ve been melting! 🥵🥶

Here’s the interesting part. For some odd reason, I opened the book from back to front first. Why did I do that? Of course I had no idea ( SPOILER again) the personal letters from his warrior girls ended the book. That was more than enough to distract me from the stacked food on my kitchen table. I then immediately closed it as tears formed in my eyes. Am sure you know it became my reading material for the next few days. Some stories in there I knew but then there were those WOW and shocker moments for me.

I am so grateful to have both these gifts as they have inspired me in so many ultimate ways. I do hope more people can understand who Warrior genuinely was in spite of his difficult past. One of my favorite parts is when they ranked his greatest matches and most would think WMVI would be number 1. It isn’t. It’s number 2 behind WMVII. Sorry, spoiler again! I loved Warrior and Randy together and can really see why that was picked as number 1. I also am glad more is explained in detail about Warrior’s HOF induction as talks happened a few years prior than most think. We need the good, bad, AND great as it’s all in there. I never even saw Dana’s foreword until weeks later as the pages were stuck together! They also have an old wrestling license of Warrior’s as Jim Hellwig of course but when did he live in Oregon? Such great stuff and it definitely will stay with me for years. 💙

So, warriors-there’s my stories of both the DVD and book. I can add many more but will leave it at this. Am sure any of you who own them have your memories of receiving and can share too. Not everyone will have reactions to collectibles or purchases but I am always ultimately humbled that I do! 🙋🏻‍♀️💜🙏🏻💪🏻👍🤗

~~~ Check out my website for book info on you know who ⬆️ in which I share more stories of Warrior’s spirit guiding me. It’s also on Amazon and other retailers(: Leave me a review, so much appreciated! I also have a more spiritual blog on there so share, like, and comment!!!