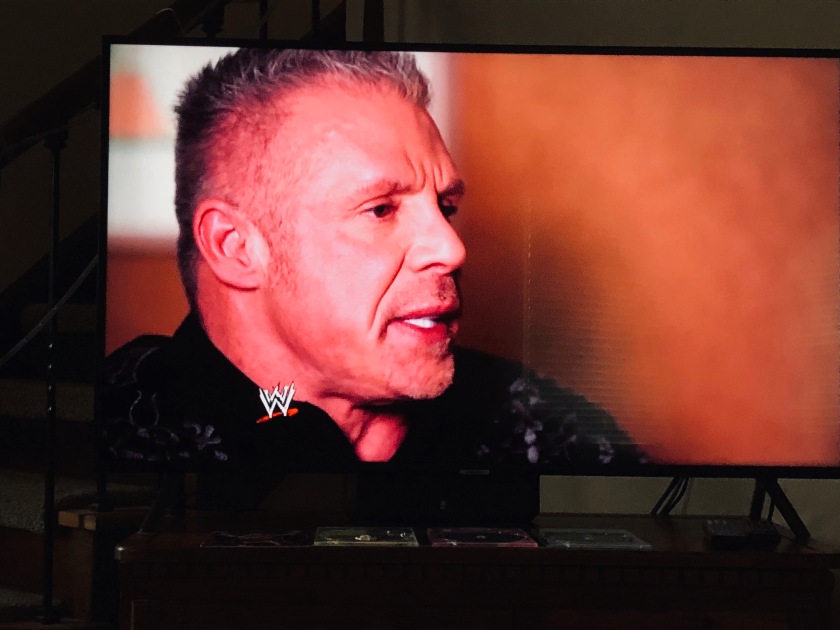 Warrior Fans– don’t be alarmed by this title! I never did actually break my back but just had to use a wrestling move as it pertains to a former injury of mine. I mention this briefly in a chapter of my book Spirit and Belief. The DIY Warrior Girl never gives up and wants to do things without help. This is great but can become complicated at times.

My injury many years ago is not comparable to Warrior’s concerning his ankle but once again, reactions and emotions are all the same. He detailed breaking his ankle during the end of a match with “King” Harley Race. This was early in the Ultimate Warrior’s career and a first big opponent. The story is quite graphic involving his ankle swelling up as big as his thigh which led to a staph infection. He would suck the puss out when no one was around until he got caught. Wow– so lucky it never amounted to gangrene!!!

The first time I watched that interview on the Ultimate Collection DVD, I immediately thought of my injury at work over twenty years ago. Very surprised to have that come to mind and yet it did. This preschool involved a different approach while still incorporating traditional teaching. It was more gym-based which involved building obstacle courses and using equipment. So wish I had this type of experience as a child, what a confidence booster.

I was moving a big wooden tunnel across the floor as one of the wheels got stuck on the carpet. My back shifted and I felt it. No big deal as I just continued on assisting the other teacher. Later on, it hit me. Breathing became difficult but I had to get through the day. It would pass, right?

Well, it didn’t for quite a while. Good thing it wasn’t a fractured disk! I remember the pain being mostly in my lower back and then right under my rib cage. What would a chiropractor do? Paging “Dr. Hellwig!” 😜 I never took anything at first but just tried supporting my back by sitting up against hard surfaces. That first night I went and found a wooden board to use with my back and the wall. This was the best way to watch T.V.

The next day was really tough getting up from lying down all night. I knew then my alarm would have to be set earlier to give me extra time. At work I did my best to bend correctly from my knees as to not aggravate the injury more. When we sat, I needed that wall for support. Here’s where the feeling is the same as Warrior’s injury. I also didn’t want anyone to know since this was early in my years there.

I took Tylenol and just waited it out. My mom said I should see a doctor but really– why? Plus, I had it under control but just prayed nothing would worsen. We didn’t regularly see doctors anyway so a specialist was not in my independent plans. I seem to recall someone at work noticing me grimacing a little once but shrugged it off as nothing. After about a month, the pain finally subsided and I felt much better. I still moved slow as to not re-injure but with time, it healed.

Who knows how I exactly remembered my “backbreaker” story as Warrior was talking about his ankle. Maybe because of his almost profession or perhaps both of our independent ways of fixing it ourselves. I believe it was both. Yes, he did get help and my injury healed but we both did our own mending first. The warrior spirit is the same- always. 💖

My injury obviously wasn’t as serious or as dramatic but the mindset was and still is. There were so many of my stories brought up as I watched or listened to him tell all his. The logic might not equate but the emotion does with everything I recalled.

I still kinda giggle when I see a backbreaker move in wrestling but especially when thinking of Wrestlemania VI. Gorilla Monsoon says: “… cervical vertebrae area.” Jesse Ventura corrects him with: “No, Monsoon it’s the back!” Gorilla’s response: “Oh, sorry.” What a different career Warrior would’ve had as a chiropractor.., After all, he did call himself “Dr. Warrior” sometimes! I do have a sunburned back so perhaps the doctor will see me now!!! 😉

~~ He could’ve been a Doctor during the week and bodybuilder on the weekends! I can’t even imagine him without wrestling, can you???