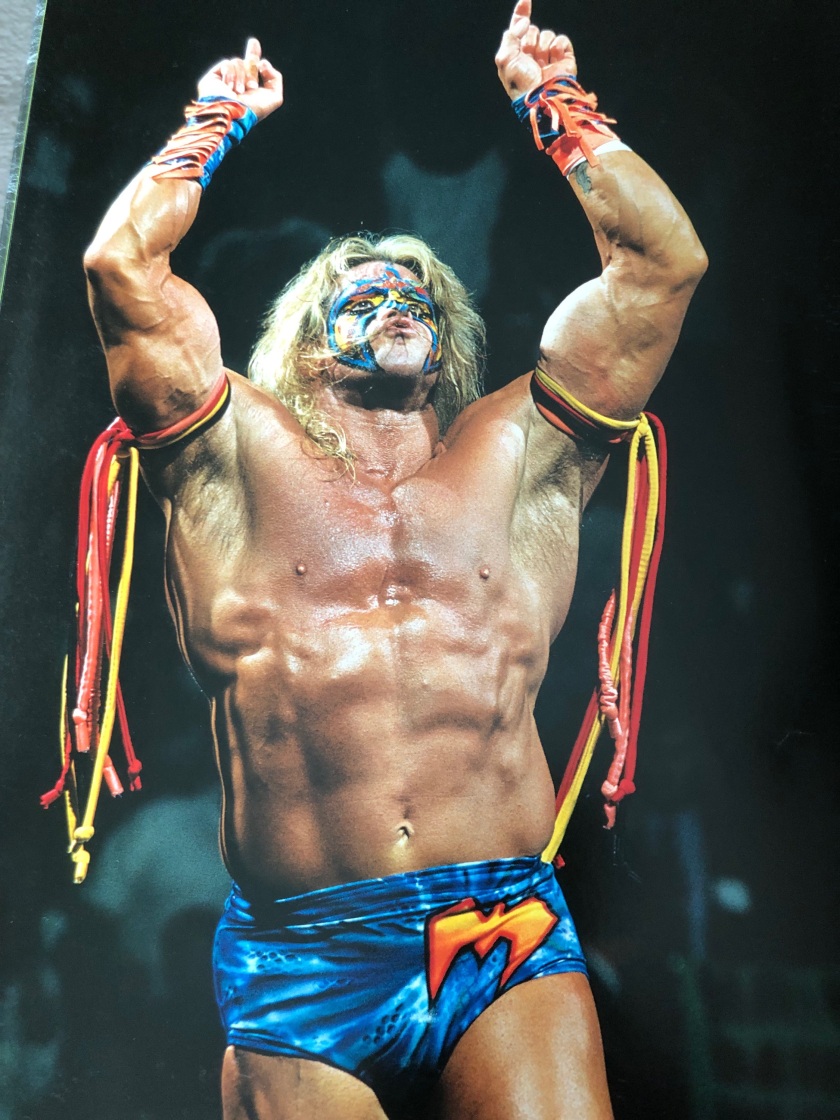 Before I begin today’s post, a quick acknowledgment is sent out to WWE’s own Sue Aitchison on receiving the Warrior Award this year during the HOF ceremony. Sue has been a longtime WWE employee for over 30 years and heads up the Make-A-Wish program. She has helped grant wishes to over 6,000 kids! I am so excited to see another woman receive this honor! Well deserved and congratulations to Sue!! 👏🏻🏆

A few weeks ago, I wrote about the idea of U.W. being bad but today harbors another idea… A new question has been coming to my mind lately and maybe some of you Warrior fans or WWE followers can help me? I have often wondered if the Ultimate Warrior character would work in pro-wrestling today. Let’s look at their slogan of Then, Now, and Forever. Of course then. Of course forever. What about now? My first answer was an emphatic NO! Then, I thought of the little things. Remember, I don’t watch today so again all my feelings.

The paint is still used by some performers in small ways, some guys have a lot of hair going on, yelling- yes, muscles- ok, there’s all that. The no’s of course would be the running, addressing the “gods,” thumping his chest, shaking ropes, snarling, and let’s not forget all that color. Dana Warrior has also said she misses the colorful performers of yesteryear with all their gear. Sure, a little of that still exists but not like it did back then.

The bigger issue of the U.W. character probably not working today is the lack of creativity. Warrior had also said this. The storylines can get pretty crazy– that I know but so much more is scripted today. The performers don’t have as much “control” in a way like they had years ago. Warrior would agree and walk just on that alone.

I think in the earlier years, Vince McMahon let them do so many things with less “pulling on the strings” or being fed a script. They were really trying to become more mainstream in the media and with fans. I know this is true since so much of what I’ve watched on videos is not censored like it is today! Am sure those were jokes but sometimes I literally can’t believe what some of the commentators just said!! 😬

The entertainment industry has changed of course so it’s up to them if adapting fits with their ways. There are several performers who were opponents of Warrior’s still in WWE today. They’ve probably adapted to fit in with 2019’s entertainment standards. I really believe some of what they do would intrigue Warrior. His manager Steve mentioned getting him back into paying attention just a little several years prior to his passing. Very different watching versus signing contracts and performing.

Who knows really? Warrior did always have tons of ideas but sometimes Vince had others. It’s hard to change but evolve we must. Like I’ve also said, my brain is old school with this. I do love how WWE is able to keep it fresh all the time. The women ROCK! I love how their evolution is more mainstream than ever and with Mattigan Warrior planning her run to the ring– even better! 💖

Warrior entered the then WWF at a perfect time as it was his destiny. They needed another good guy superhero and he needed them. He was involved in so many insane antics then so he’d probably love the stunts and props of today. I just feel he’d want more creative input and they don’t get as much anymore.

So, overall– would his character work today? As a whole, no. In pieces, yes. Would Warrior agree? Yes. It’s all of him or none of him (as some performers tried to emulate) and I concur. Sure, you can create a brand new “version” of a similar Ultimate Warrior but it wouldn’t be authentic and he surely is/was.

I do like the versatility of what they have in WWE today. Many performers use their real names. Rarely heard of back then unless it was part of the gimmick. Some also don’t really feel the need to add to their gear much at all. Just the basics. It works and that’s all that matters. Warrior would get bored but hey, it’s the now!

Some pay homage to our “heroes” of the past and that’s different as they consider them mentors. What an honor that is. I heard how Batista shakes ropes and Warrior loved that. To create a character that remains in minds and hearts forever is truly legendary. The current superstars are already doing this as we have our superstars of an era gone before.